Where should I begin?

Home » Where should I begin?

One of the problems which Historical Fiction authors face is just that – where to start a story? There is always a before and an after, and sometimes the now depends on what readers know about what went on before the story begins.

After the successful publication of the two part series ‘The Wars of the Magna Carta‘, I was asked to write a sequel. This is the story Of King John’s son Henry – crowned King Henry III at the age of nine.

But the story of the Magna Carta doesn’t begin with young Henry and his remarkable survival; it begins with how his father, John got the crown in the first place. Here we delve into the machinations of Eleanor of Aquitaine and her eldest and favourite son, Richard, known as ‘The Lionheart’.

Despite not being the best of friends, Eleanor and King Henry II produced eight children. However, that cooperation must have ended when Henry took Richard’s betrothed, Alys, to his bed when she was but a teenager. Alys was half-sister to King Philip Augustus of France, but he seems not to have known about that.

When Eleanor made her feelings plain on the seduction, she was sent to England. Here she was put into the protective custody of the Warden of the Tower of London. She would remain there until Henry’s death.

Now King, Richard retrieved his mother and brought her back to preside over the Plantagenet dynasty. The Angevin Empire at the time was the creation of the Plantagenets and stretched from the borders of Scotland, and included Ireland and Wales, down through what is now France and onwards to the edge of the Basque kingdom of Navarre in the Pyrenees.

When Richard declared that he would join the third Crusade, Eleanor wanted him to marry and produce an heir to keep her dynasty going. However, he repudiated Alys, not wanting his father’s mistress and left Eleanor with a problem. She solved it with a new princess; living just south of her domain of Aquitaine, Berengaria of Navarre was available and Eleanor snapped her up.

In one shrewd move Eleanor had secured her southern borders, given a promise of mutual defence to King Sancho of Navarre, who was threatened by the Spanish kingdoms to his south, and found a bride for Richard. Job done.

While Richard moved down to Marseille to join his crusader fleet, Eleanor collected her to be daughter-by-law. They set off together to catch him up somewhere along the coast of the Mediterranean. That turned out to be an abbey on the Italian coast in the Straits of Messina at Bagnara. 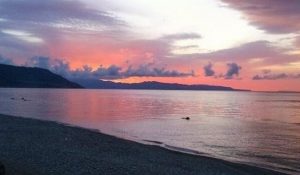 A view from Bagnara Calabra across the Straits of Messina towards Sicily. 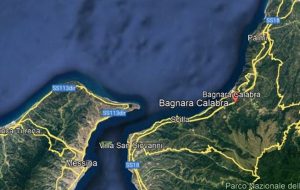 This is where Richard and Berengaria met.

But Richard and Eleanor made a big mistake; they chose the runt of the litter, John, as Regent of England while Richard was absent en croisade. He made such a mess of it that it forced the powerful magnates of England to produce Magna Carta in order to curtail the power of monarchs in England. This takes us to the Wars series and on to Henry III.

The full story will be told in the forthcoming novels to published later this year. The story of Henry III and more about the Magna Carta will follow at a later date.