The Road to Jerusalem

Preparations for the long road to Jerusalem during the first crusade began when the Normans landed on a beach in the south of England – long before the crusades were envisaged. The success of the invasion of England was due to the meticulous planning by William, the then Duke of Normandy. END_OF_DOCUMENT_TOKEN_TO_BE_REPLACED

The First Baron’s War took place from 1215 to 1217. It began because English Barons were angry with King John due to his failed wars overseas, the taxes he demanded to pay for them, and his repudiation of the 1215 Magna Carta. The Barons made the move to invite a French Prince and army to England to take the throne. This led to war and put them on the opposite side to some notable historical figures, including Nicholaa de la Haye and Matilda of Laxton.

During the war Lincoln and Laxton became vital locations for the loyalists. If they had been lost to the French, the whole war could have been over. Luckily, the incredible leadership skills of Nicholaa de la Haye and Matilda of Laxton prevented this. The latter even dealt with efforts by High Sheriff of Nottingham Philip Marc to take over control of the forests that were Matilda’s domain.

One of the keys to victory in the war against the French was how Nicholaa and Matilda worked together. While Nicholaa held Lincoln Castle against the besieging army, including their siege engines, Matilda and her Saxons were the eyes and ears for the loyalists. They were a scouts, keeping an eye on French movements and looking out for English reinforcements. In addition, they kept access to the castle open during the siege. This ultimately allowed the English army to relieve the castle and break the siege.

The little known village of Laxton, in Nottinghamshire, lies within sight of the great Cathedral of Lincoln. This proximity is why it had such an important part to play in the Battle for England during the Wars of the Magna Carta. The village was also home to Matilda of Laxton, one of history’s most impressive but lesser known leaders.

The amazing thing about Matilda is she was very successful as Constable and Keeper of the King’s Forest of Sherwood. She also went beyond her duty to provide valuable support to Nicholaa de la Haye, Constable of Lincoln Castle during its siege in 1217.

Laxton is at present part of the Crown Estates. It is also the last remaining example of a Saxon strip farm left in England. A Bailiff has the task of managing it, presiding over a Manorial Court. This is fantastic because it preserves the culture. In addition, it honours the Saxons that fought with Matilda to defend England from the French.

Below is a representation of the castle. 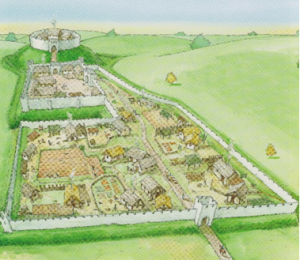 If you are interested, you can visit the resting places of Nicholaa de la Haye and Matilda of Laxton.

Nicholaa’s tomb is in the church of St Michael, Swaton, Lincolnshire. 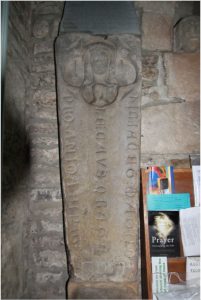 Matilda is buried in the church of SS Peter and Paul, Old Brampton, Chesterfield. Her tomb cover is on display inside the church.

Details of the battle as well as the siege of Lincoln, with the cooperation between Matilda and Nicholaa, can be found in the two Wars of the Magna Carta books by Austin Hernon. You can also learn more by following this link.

In August 1096, on the occasion of the first crusade, the Northern Europeans (known collectively as ‘Franks’ by the Muslims) mounted horses at their various starting points with the intention of riding to rendezvous at Constantinople. Here they crossed the Bosporus, making their way through Anatolia and along the coast until they neared Jerusalem. END_OF_DOCUMENT_TOKEN_TO_BE_REPLACED