The Road to Jerusalem

Home » The Road to Jerusalem

Preparations for the long road to Jerusalem during the first crusade began when the Normans landed on a beach in the south of England – long before the crusades were envisaged. The success of the invasion of England was due to the meticulous planning by William, the then Duke of Normandy.

William and his commanders knew that a landing, possibly faced by a hostile reception, would require certain elements, including the securing of a beachhead in order to safely land the troops and equipment necessary to support the invasion.

The extract below is taken from eye witness accounts. It explains the detail of that landing and how William understood the needs of a seaborne invasion.

“The duke had a great many knights and ships in his fleet, many archers and men-at-arms, bold and brave men, carpenters and engineers, fine smiths and farriers.

“The barons had banners and the knights had pennons; they stationed themselves next to the archers, having first taken possession of the terrain. The carpenters, who came next, held great axes in their hands and they had adzes and mattocks hanging by their sides. When they had joined the archers and got together with the knights, they decided on a good spot to establish a strong fortress. Then they threw down from the ships and dragged on land the wood which the Count of Eu had brought there, all pierced and trimmed. They had brought all the trimmed pegs in great barrels.

“Before evening, they had built a small castle with it and made a ditch round it, creating a great fortress there. Then you would have seen kitchens built, fires lit, and food brought out, at which time the duke sat down to eat; the barons and the knights had plenty to eat. The duke had brought a great deal with him; they all ate and drank a lot and were very happy to be on land.”

An IKEA fortlet, who’d a thought?

The Normans were the very best of military planners. When Duke Robert left Rouen in autumn 1096, plans for the capture of the City of Jerusalem would have already been in place. The Normans, especially Robert, were not ones to leave everything to chance, or even to God’s will.

There are two events in the chronicles which are worth exploring further.

Historians speak about “a Genoese fleet appearing in the harbour” at Latakia, near Antioch.

The leaders of the first crusade had decided to capture Antioch; it was in their path and was seen as dangerous to leave a well-established enemy in their rear as they advanced towards Jerusalem. Unfortunately they had brought no siege materials, and it is difficult to see how they were going to succeed in taking one of the best defended cities in the Middle East at the time.

Two things happened. Outside the walls they set up temporary forts to protect the encampment from sorties by Antioch’s governor – Robert’s idea?

Then Robert left the siege to go down to the coast, where the river Orontes meets the sea, to set up supply lines with Cyprus – more Norman planning?

He attracted much criticism for that but something was misunderstood.

Robert was the best of friends with Matilda de Canossa, she being the de facto ruler of Northern Italy at the time, owner of Genoa, and director of any Genoese fleet. Robert soon established regular lines of communication for supplies between Antioch and Cyprus, for which he has received little credit, until now.

Next – “the appearance of an English fleet, off the coast near Jerusalem”.

Spoken about by monkish scribblers, chroniclers working to order, and often written well after the events, and then with or without interviewing the participants.

But these were hardly fortuitous events of chance in the middle of, what was then, a world war. If you connect those two incidents and then add the planning experience of Robert of Normandy – one might easily see the influence of a guiding hand behind them.

The chroniclers spoke about ‘timbers being found in a cave from which siege engines were fashioned’. I suggest that, the unexplained ‘English fleet’ was carrying knock down, IKEA, siege engines which Duke Robert had loaded in the English channel. Once they were built, the walls easily came tumbling down.

When Robert went to Italy the first time, to marry Matilda on the instructions of his father, he crossed over the Alps. To go south of that obstacle would have meant passing through some lands which might have been hostile to his first mission.

When he set off for Jerusalem it was different; as crusaders or pilgrims all roads to Rome and beyond are open to all. In addition, the first target was Constantinople, and the Bosporus. 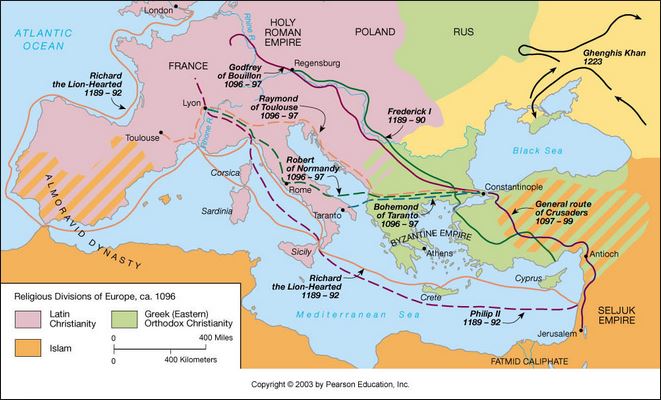 The Emperor of the East, the Byzantine, Alexios Komnenus, had asked for assistance from the church in Rome. In return he offered to host the great armies travelling to Jerusalem at this crossing point from Europe into Asia, and then ferry them over. This meant that all the travellers were headed for Constantinople. The distances they covered were prodigious, as can be seen from the following estimates. All measurements are in Roman miles and marching capabilities.

The obvious question is, ‘Why not travel by sea directly to the coast?’ Ascelon, near Jerusalem offered good port facilities.

The reasons are quite simple:

Robert’s answer; Send the materials of war by sea, buy horses in Italy and ship them to Cyprus, and then use Cyprus as his forward supply base. Robert, alone amongst the expedition leaders, had the ear and confidence of Emperor Komnenus. This became a vital link in Robert’s supply chain as Cyprus was within the Byzantine Empire.

Note the method of disembarking horses shown on the Bayeux tapestry above, clearly they are being lifted out by a swivelling boom. Contrast this with the side door method developed later in the history of the crusades.

If these accounts and the journey of Robert of Normandy on the first crusade have caught your interest, read the Wayward Prince book 2.