The Crusades and the Sea

Home » The Crusades and the Sea

In August 1096, on the occasion of the first crusade, the Northern Europeans (known collectively as ‘Franks’ by the Muslims) mounted horses at their various starting points with the intention of riding to rendezvous at Constantinople. Here they crossed the Bosporus, making their way through Anatolia and along the coast until they neared Jerusalem.

Read our post ‘The Road to Jerusalem’ or click The Landing in Topics for more information about this and then pick up book II of The Wayward Prince for the full story.

By the time of the third crusade lessons had been learned. So that in contrast to the first crusade, the leaders, including Richard I, made preparations to cross the sea from Sicily to Acre by ship.

What ships were available to them? Let us see.

The image above is a Cog, or Kogge, and was typical of northern European ships of the time. They were useful for stores, men, or horses. They were built in various sizes to a similar design.

Then a much more suitable design was developed from the Cog for the transportation of animals. See the woodcut below.

Ships such as these were adopted for the transport of horses. They were easier to load through the side door ramps, which were sealed for passage at sea. In addition, the ships had flat keels which made them suitable for beaching in order to disembark the animals.

Note the side ramp in the illustration below, and also examine those ships in the background. Some are clearly of Viking heritage. The steering oar can be seen on the third ship from the bottom, but the ship at the top of the picture shows a vessel with a fighting castle at the bow – the fore castle, which came to be known as the fo’c’s’le. 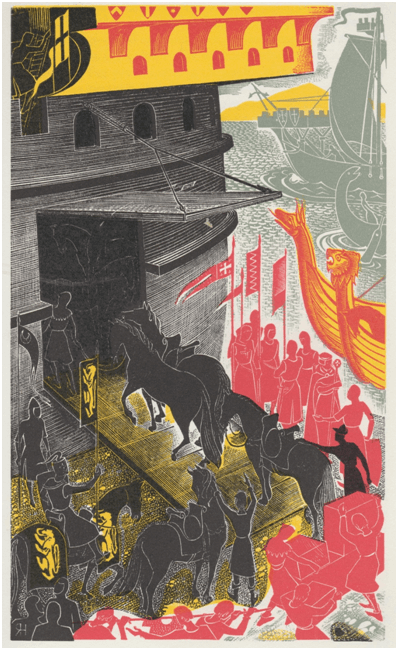 The illustration is by Raymond Hawkins for a compendium, now discontinued, of eyewitness accounts from the third crusade. It was originally published in 1958 by The Folio Society, which I acknowledge with thanks.

We will continue our crossing the sea theme in later posts. It will also be a feature of the upcoming book about Berengaria and Richard I.